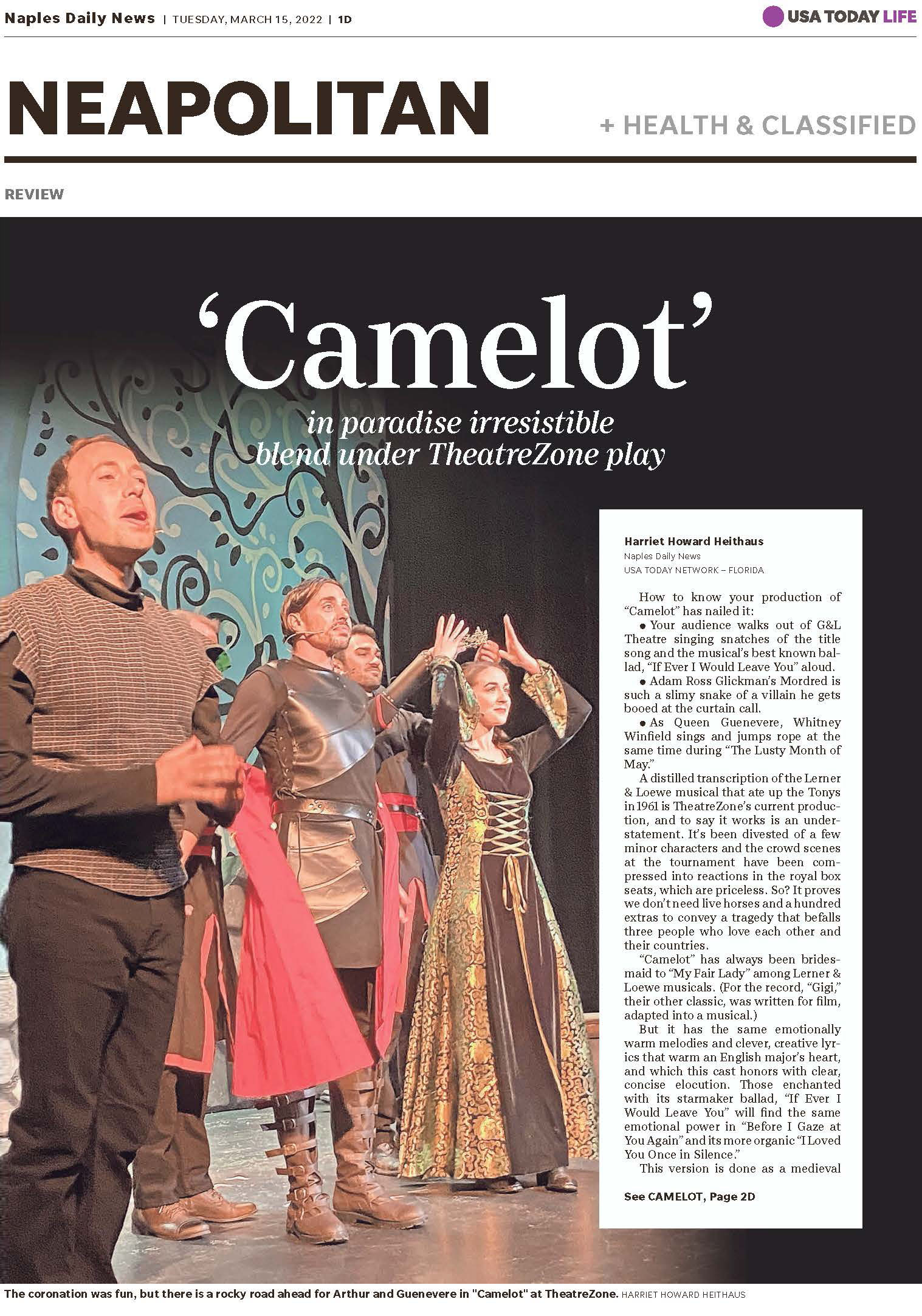 How to know your production of “Camelot” has nailed it:

A distilled transcription of the Lerner & Loewe musical that ate up the Tonys in 1961 is TheatreZone’s current produc-tion, and to say it works is an under-statement. It’s been divested of a few minor characters and the crowd scenes at the tournament have been com-pressed into reactions in the royal box seats, which are priceless. So? It proves we don’t need live horses and a hundred extras to convey a tragedy that befalls three people who love each other and their countries.

“Camelot” has always been brides-maid to “My Fair Lady” among Lerner & Loewe musicals. (For the record, “Gigi,” their other classic, was written for ﬁlm, adapted into a musical.)

But it has the same emotionally warm melodies and clever, creative lyr-ics that warm an English major’s heart, and which this cast honors with clear, concise elocution. Those enchanted with its starmaker ballad, “If Ever I Would Leave You” will ﬁnd the same emotional power in “Before I Gaze at You Again” and its more organic “I Loved You Once in Silence.”

This version is done as a medieval show in the local park. Its opening and surprisingly absorbing closing narra-tive details the progres-sion of “Camelot” from middle age oral history to the pens of Lerner and Loewe. Costumes and props appear from trunks, and two bare tree branches at nether ends of the stage re-leaf to re-ﬂect the season. In keep-ing with the character em-phasis, the castle of Cam-elot is reduced to a visual cue: a household banner-size mural hanging to one side of the stage.

It’s minimalist, but ef-fective under scenic de-signer Tláloc Lopez-Wa-termann, and choreogra-pher Karen Molnar-Danni wisely conﬁnes dance to the appropriate moments. Keith Thompson, back af-ter “Bright Star,” has to be counting his blessings to have this orchestra, and the lighting of Adam Trummel puts our atten-tion and emotions where they want us to be. Our fa-vorite: the demonic glare of red footlights as the re-belling knights chorus “Fie on Goodness!”

That brings us to a shout-out for Glickman, phenomenally eﬀective in two supporting roles. In the ﬁrst act, he’s Lancelot’s Squire Dap, the slightly goofy servant of few words trailing his knight everywhere, pan-tomiming Lancelot’s words in abject, comic loyalty. In the second act, he does a 180 from the pratfalls as the deadly Mordred, Arthur’s love child from a long-ago af-fair. Mordred is out to sub-tly wreak chaos on every-thing dear to Arthur, and Glickman makes him thoroughly chilling.

Robert Koutras is the menschiest Arthur we’ve ever seen, yet logically so. This is a guy who pulled Excaliber out of the stone because he was trying to save himself a trip home to fetch his own knight’s blade. He oozes sincerity, with just a bit of panic gnawing at him under his royal robes. He writhes around the stage steps in agony at the prospect of meeting his bride, and even the young supporter who pledges fealty in the ﬁnal scene momentarily sets Arthur on edge.

Whitney Winﬁeld, on the other hand, creates an elegant Guenevere, with a British penchant for atti-tude and a sweet, strong voice. She’s conﬂicted over her feelings for the brash French knight at the Round Table and her sup-port for her forever-phi-losophizing husband.

Gerritt Vandermeer wins us over from his opening “C’est Moi,” hys-terically funny — again, with a little help from Glickman. He plays Lan-celot as the dual lineage of Dudley Doright and Buzz Lightyear, with Maurice Chevalier’s accent.

There are a few mo-ments, largely in the ﬁrst scene, during which the orchestra is hurrying the vocalist somewhat. And the accents occasionally lapse as the musical pro-gresses. But that doesn’t hurt the power of the per-formances.

This is one of Theatre-Zone’s strongest musicals in recent history. It shows again that Founding Ar-tistic Director Mark Danni really knows how to han-dle quality material. The condensed version of that is: Go see it.