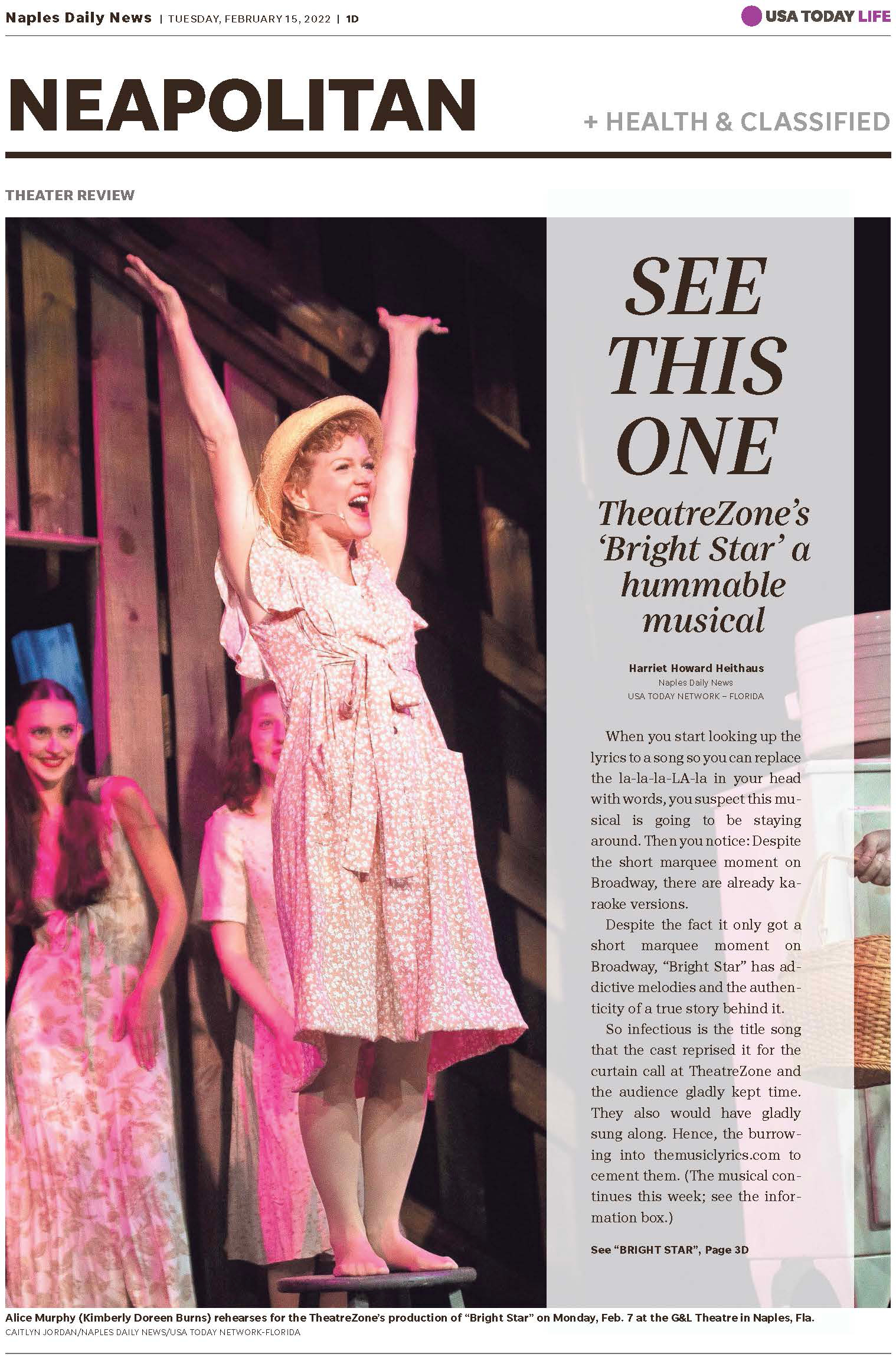 When you start looking up the lyrics to a song so you can replace the la-la-la-LA-la in your head with words, you suspect this mu-sical is going to be staying around. Then you notice: Despite the short marquee moment on Broadway, there are already ka-raoke versions.

Despite the fact it only got a short marquee moment on Broadway, “Bright Star” has ad-dictive melodies and the authen-ticity of a true story behind it.

So infectious is the title song that the cast reprised it for the curtain call at TheatreZone and the audience gladly kept time. They also would have gladly sung along. Hence, the burrow-ing into themusiclyrics.com to cement them.

“Bright Star” is making its ﬁrst rounds of regional theater in Florida, and TheatreZone is one of the lucky ones to have nearly all the orchestral talent for its American music right in Naples. (There’s only one visi-tor: Those sweet ﬁddle licks come from Brittany Halen, a Houston-based actress-musician who got her own show here in “At the Movies!” last season.)

TheatreZone is also lucky to have as musical direc-tor Keith Thompson, who has national tours of musi-cals like “Mamma Mia!” and “Cabaret” under his belt. He knows when to bring out the ballad (“The Sun Is Gonna Shine”) and when to let it twang, as in the ﬂirty “Whoa, Mama!”

“Bright Star” has its own celestials: writers Edie Brickell and Steve Martin, who have become bluegrass luminaries above and their other onstage careers. We occasionally wish they had spent a little more time at the lyrics store, because there’s more repetition than necessary in several songs. And although they wed au-thentic music to a true story, its requirements gave them little time to develop the relationships between characters.

Still, it’s a treat of a musical, solidly attuned to its story and song parameters. No rap, no onstage pyro-technics — just good material and casting in a work that requires its two main actors to age 20 years and presses everyone into solo spots.

Since this musical was in diapers, Kimberly Doreen Burns has had her sights on the central role of Alice Murphy, whose newborn is snatched from her by a grandfather determined to save his son’s ﬁnancially favorable marriage. She proves the perfect ﬁt for the heroine determined to thrive, from a radiant 16-year-old to a jaded literary editor. Burns is dramatic without ever straying into soap opera, and those tears of joy in the story’s climax are real.

Robert Koutras is a ﬁne singer, athletic and emotive as Jimmy Ray Dobbs, Alice’s doting, yet powerless, boy friend. But one looks at the couple and thinks she’s the more likely candidate to be the mayor’s progeny than he. The “Grease” hair desperately needs to be tamed.

There’s not a weak character in this cast, and there are some zenith moments for nearly all:

First credit goes to founding artistic director Mark Danni for bringing this one to Naples. Following a March production of Lerner and Loewe’s “Camelot,” he’s planning another that Broadway shorted, “The Bridges of Madison County,” in April 21.

After this production, we can’t wait.